Undeniable: Evolution and the Science of Creation by Bill Nye 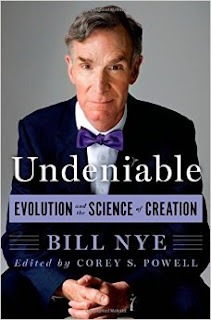 Over a year ago Bill Nye debated Ken Ham, the founder of the Creation Museum, about evolution.  That debate is what led to this book refuting creationism beliefs in many detailed chapters.  Bill Nye does a great job taking very complicated ideas and writing about them in an accessible way while injecting some humor. And a lot of smackdown for Ham and his followers.  I spent a long time on this book, reading a few chapters at a time then taking time to reflect, because there was so much to think about.  Much of it is not easily recalled but I do remember Bill's stated reason for the book:  It's easy enough to write off adults such as Ham and ignore what they say and believe because you will never convince them to change their beliefs.  But their beliefs are being passed on to the next generation and that is dangerous and impacts our world.  As a teacher, I really appreciate Nye's feelings about impacting the future as well as his love of learning just for its own sake.  Bill, Bill, Bill, Bill!!!