The Hearts We Sold by Emily Lloyd-Jones 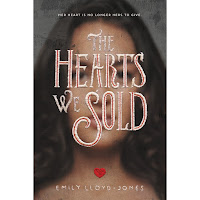 No one knows what the demons do with the arms, legs and other body parts they take in exchange for granting wishes, but it's clear that a lot of people have been taking advantage of their presence ever since the demons announced they are here.  Dee has never considered a deal until she learns that she won't be able to stay at her boarding school unless she is able to raise a lot of money, fast.  The thought of living back at home with her parents is untenable given their alcoholism and her father's temper so she finally approaches a demon she has seen at the hospital where she volunteers.  To her surprise, he asks for her heart which he will keep for two years while she doesn't age.  Dee is also dismayed to learn that she will be joining a group of other heartless teens in performing dangerous tasks for their Daemon.  Together, they have to enter randomly occurring voids and set off explosions to close them before whatever is inside the void finds a way into our world.  But what is in the void?  And if the demons are worried about it, does that mean that Dee is now fighting on the side of evil?


I thoroughly enjoyed this book from start to finish. All the characters are well-developed and interesting, not just the two main ones.  And the answers as to who the demons are and why they have decided to revel themselves to the world and what they are doing with the body parts are all much more interesting than I had imagined.  Real losses among the heartless up the stakes  on the action front but this book is about more than action.  Dee's struggle to trust and to deal with her family actually moves much more slowly, but realistically.  There are layers beneath a general fantasy thriller-esque title.
Posted by Jenny Ashby at 9:22 PM