The House in Poplar Wood by K.E. Ormsbee 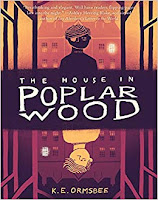 Thanks to The Agreement, brothers Lee and Felix each live with one of their parents and cannot see the other.  Lee lives with his mother who serves Memory, a Shade who helps people remember or forget memories.  Felix lives with their father who serves Death. Because the parents serve different Shades, they cannot see each other nor their other son.  Both boys help their respective parent and it is assumed they will each become the next apprentices to the Shades at age 16.  Both boys would like to free their family from The Agreement but that seems impossible until Gretchen comes into their lives.  Gretchen comes from a family of Summoners - people who can command the Shades through Rites - and has been told to stay away from Lee and Felix.  But after overhearing a conversation that indicates Death might have overstepped his role, Gretchen wants help investigating what's really happening and she won't take no for an answer when it comes to getting the brothers to comply.  In return, she might be able to help with their family problem.

This book has such a unique premise and that usually translates to a big thumbs up for me but I'm feeling somewhat ambivalent about it.  There were parts that I found intriguing and wanted to keep reading, but overall it wasn't a page-turner for me.  It would've helped a bit if the roles of the Shades, Summoners and apprentices were more clearly explained earlier on but I got there with it all.  It also would've helped if the terms of The Agreement had been explainer earlier on but again, I got there.  But really, those are small quibbles.  I think the biggest problem for me was that the solving of the mystery and the role each character played in it didn't become fascinating for me until too late in the book.  Also, the feeling seemed to vacillate between spooky/scary and more straight up mystery.  With supernatural suspects.  Not a bad book, but not a favorite.
Posted by Jenny Ashby at 3:28 PM No comments:

Abby has landed the internship of her dreams at local boutique Lemonberry. She is a huge fan of the retro look and the fact that their dresses are available in plus sizes as well so she can wear them and write about them on her popular fashion blog.  In fact, her social media skills are a big part of what landed her the internship which has led to jobs and free clothes for previous interns.  The promise of so many great things leads to a big shock when Abby finds out the owner has taken on two interns this summer.  The other girl is Jordi Perez, a girl Abby knows vaguely from school who is rumored to have spent time in juvie.  The two girls hit it off and before long Abby finds that she has more than "just friends" feelings for Jordi.  Even more surprising to Abby, Jordi feels the same.

In thinking about this post I was going to say that I enjoyed this book immensely but that there is nothing groundbreaking in terms of rom-com.  Then I shook myself back to reality with a reminder that the main character is a fat, queer girl who gets to have a romance that is not all about either of them struggling to come out so it IS pretty groundbreaking after all!  Now, Abby does have to do a bit of coming to terms with who she is as a fat girl, but I can love that too because no matter how body pos you are, you still live in society.  There are a few things I would've liked to be a little different - more resolution in the mother/daughter relationship, more time with her best friend, and a stronger focus on the new friendship with Jax because the "Best Burger" stuff doesn't seem like enough of the plot to warrant it's own title shout out - but, hey, I'm not gonna let that bring me down.  Because the rest of the book is just good with fun characters who love and support each other.  It is exactly what I wanted it to be both in terms of a fat character and a not-straight teen.  It ended my year of reading on a high note!
Posted by Jenny Ashby at 2:53 PM No comments:

The Assassination of Brangwain Spurge by M.T. Anderson, Eugene Yelchin

Elves and goblins have been at war for about a thousand years when the elfin king decides to send an emissary to the goblins with an offering - a large gemstone found underneath the king's wading pool.  The head of the king's secret police force chooses his old schoolmate Brangwain Spurge to deliver the stone.  Spurge was picked on in school and nicknamed Weedy and his schoolmate feels he would be an unassuming choice (and easy scapegoat).  Spurge is sent to the goblin kingdom where he is hosted by Werfel, a fellow scholar who is anxious to make the elf feel at home and to impress the goblin overlord.  Unfortunately, all of Werfel's efforts are for naught as Spurge constantly finds fault with everything he sees and seems completely uninterested in sharing any information.  The two also disagree over matters of fact about who provoked the other and started the war.  But after Spurge slips away in a failed attempt to spy on the goblins, the two are both under suspicion and find their fates intertwined as they escape together.

I expected a silly book from M.T. Anderson and I was not let down.  Werfel is wonderfully hospitable and his feelings are so easily bruised by his rude guest who doesn't start to realize what all they have in common until things start to go wrong.  It's not until Spurge is in danger himself that he began to interest me as that was the point where he finally developed some sort of personality.  And the revelation about the gemstone was also a turning point in my interest in the story.  While I ended up liking the book and chuckling at the humor, I feel like it is another one of many books that appeals to adults but will have a very limited audience with teens.  The cover does it no favors and the humor is sly.  Since it is nominated for a reading program in my county I will have the chance to see if my assumptions about how teens respond to it are accurate.
Posted by Jenny Ashby at 9:59 AM No comments:

With the Fire on High by Elizabeth Acevedo

Emoni is going into her senior year of high school and is not sure what her future might hold.  She is a gifted home cook so when her school offers a new elective in culinary arts, she signs up even though her life is already very busy with a part time job and taking care of her two year old daughter. As an added pressure, the class is scheduled to travel to Spain over spring break but only if she can come up with enough money to pay for the trip and that seems almost impossible.  In the class she meets new boy Malachi but she is clear in letting him know she doesn't have time for anything other than being friends.  In the midst of juggling all the parts of her life she is also concerned about her abuela who seems to be going to the doctor more than usual while trying to form a closer relationship with her estranged father who left when she was just a baby.

Another beautiful book from Elizabeth Acevedo.  The way I could tell I was loving it is that I read for 30 minutes and then realized I hadn't checked the percentage counter on my Kindle in all that time!  That is unheard of for me since I am competitive with myself and always feeling like I'm behind on my To Do list.  So, things I love:

Posted by Jenny Ashby at 9:39 AM No comments: